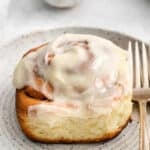 These easy Cinnamon Rolls are made with a soft fluffy dough, a swirl of buttery cinnamon sugar, then baked until golden and topped with cream cheese icing for the best-tasting buns around!

Need a few other easy breakfast recipes? Try these Homemade Crepes, these Blueberry Waffles or this easy Coffee Cake recipe.

The smell of homemade fluffy cinnamon rolls in the morning is the kind of aroma that lets you know it’s going to be a good day!

I usually reserve making them from scratch for a special occasion, but even when I’m just in the mood for no apparent reason, I do skip the store-bought packages and get to baking! They’re easy to make, especially if you’ve never worked with yeast before, but these sweet rolls are decadent and indulgent, so they are definitely an occasional tasty treat!

They make the best Christmas morning or brunch, Thanksgiving or Easter dessert, and birthday breakfast-in-bed pastries! Anything left means the next morning you’re just really lucky!

Freshly baked cinnamon buns are warm and gooey and the kind of thick and fluffy pastry you take a big bite of without a care in the world. You’re nose-deep in delectable cream cheese icing and you can’t wait for more!

For the Cream Cheese Icing

A quick blend of cream cheese, powdered sugar, vanilla, and heavy cream makes the best cream cheese icing which is the perfect sweet and tangy pairing for these cinnamon rolls!

How to Make these Perfect Cinnamon Rolls

This recipe requires just one full rise to get that rich buttery dough nice and fluffy, it’s swirled with a cinnamon sugar filling and then topped with a simple 4-ingredient icing!

Step 1: Proof the yeast by adding warm milk and sugar to a large bowl of a stand mixer and sprinkle yeast overtop. Allow it to sit for 5 minutes until it foams.

Step 2: Whisk in the eggs, melted butter, and vanilla and combine well. Then, slowly add the flour and use the dough hook attachment to blend at low speed. The dough should come together in a smooth ball around the attachment.

Step 3: Continue kneading for 5 minutes until smooth and slightly tacky. Place the ball of dough into a greased bowl and cover with a towel. Let the dough rise in a warm draft-free area for about an hour until it has doubled in size.

Step 4: Towards the end of the rise time, combine the cinnamon, brown sugar, nutmeg, and salt in a small bowl. Mix well and set it aside.

Step 5: Grab the dough, and roll it out into a large rectangle on a lightly floured surface. Keep it about ¼ of an inch thick. Spread the butter on the whole surface area and then sprinkle a generous amount of the cinnamon-sugar mixture overtop.

Step 6: Starting with one of the longer sides, roll the dough up tightly into a log. Pinch the seam once it’s rolled up all the way so that it doesn’t unroll.

Step 7: Use a serrated or sharp knife to cut the rolled dough into 1-inch discs. Place the unbaked rolls in a single layer in a greased baking dish and cover them for a second rise while you preheat the oven to 350 degrees. They should bulk up a bit more as they wait.

Step 8: Bake for 30-35 minutes until golden brown and then allow the cinnamon rolls to cool for 10 minutes before adding the frosting.

To make the cream cheese icing, mix the softened cream cheese and gradually, the powdered sugar on low speed. Use either the bowl of a stand mixer and paddle attachment or a hand mixer.

Slowly add the vanilla extract and heavy cream and blend on low speed until fully combined.

Beat on medium-high speed for about 2 minutes until the icing is fluffy, scraping down the sides as you go. Once the cinnamon rolls have cooled for about 10 minutes, spread the icing overtop each one.

There is no shortage of ways to glaze a cinnamon bun! You can swap the cream cheese icing for any of the following:

Can I make these ahead of time?


Absolutely! You can do most of the work the night before and then pop them in the oven in the morning! All you need to do is prepare the rolls up until you place them into the prepared dish. Cover with plastic wrap them and refrigerate them overnight. Bring them to room temperature 30 minutes before you’re ready to bake.

How to store leftover cinnamon rolls?


These babies can stay at room temperature for up to 3 days! They’ll be gone long before then, but in case, you can also keep them refrigerated for up to 5 days. Just be sure to cover them in an airtight container.

How to reheat them?


Simply put them in the microwave. Nothing fancy and it’s the best way to get them nice and soft again.


Cinnamon rolls can be kept frozen for up to 3 months. Be sure to cool them completely, then wrap them tightly. I like to wrap them individually so they don’t freeze together and I can just take out 1 or 2 at a time when needed.

Can I make cinnamon rolls without an electric mixer?

You can! It’ll just take a bit of kneading by hand and it’s smooth sailing after that. Steps 1 and 3 will require a whisk and a wooden spoon. Once you begin forming the dough, you’ll use your hands to knead for about 5-7 minutes until the desired soft and slightly sticky consistency has been reached. Then, continue as directed.

You can also make the icing with a bowl and a whisk! 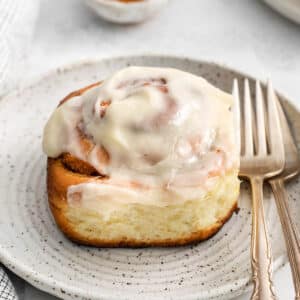 For the Cream Cheese Icing

Store leftovers in an airtight container in the refrigerator for up to 4-5 days. Reheat in the microwave for 20-30 seconds before serving. Use instant yeast if desired and skip the five minutes of rest in Step 1. Additionally, the dough will usually rise quicker so check after about 45 minutes to see if it has doubled in size. Although I recommend whole milk for the proofing or activating the yeast, you can use 2% milk or almond milk if you prefer. Be sure to measure the flour using the spoon and level method as adding too much flour will make dry and dense cinnamon rolls. Leave out the nutmeg if you’d like and just use cinnamon. Use milk instead of heavy cream in icing, if desired. Making Cinnamon Rolls without an electric mixer Complete Step 1 & 3 as directed and use a large mixing bowl and a wooden spoon or dough whisk. When the dough comes together in a shaggy ball, place it on a well-floured surface and knead by hand for 5-7 minutes until the dough is smooth and slightly sticky then continue as directed. For the frosting – an electric hand mixer can be used in place of a stand mixer. You can also make the frosting in a large bowl using a sturdy whisk or wooden spoon. Making Cinnamon Rolls Ahead Follow the recipe as written, but after slicing the rolls and placing them in the baking dish, cover the dish with plastic wrap and place it in the refrigerator overnight. In the morning, allow the rolls to sit at room temperature for about 30 minutes on the counter while you pre-heat the oven. Bake as directed and follow the recipe for icing.