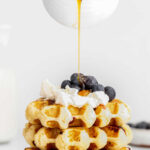 Blueberry ricotta waffles are crispy on the outside, light, moist, and fluffy on the inside, and loaded with fresh juicy blueberries!

Having quick and easy recipes for early mornings on the go is great, but if you love sitting down to a big family breakfast or brunch as much as I do, think about serving Brioche French Toast, Homemade Crepes, along with the waffles and make it a little extra special! They’re quick, easy, and cost-effective when serving a hungry crowd.

This easy waffle recipe is straightforward and only requires your basic pantry staples and of course delicious fresh and juicy blueberries. They’ll be ready in 30 minutes start to finish and are great when served immediately but can also be frozen for later on!

Using ricotta in cooking and baking is a great way to add a ton of moisture and light and fluffy textures in recipes such as these blueberry ricotta waffles. If you’ve never used ricotta in anything but lasagna, you’re in for a treat. The mild cheese doesn’t have much of a flavor, but what it lacks in flavor it makes up for in function. It really is one of the best ingredients you can add to your waffles!

They’re light and fluffy on the inside with a slightly crisp exterior. Serve with a topping of simple maple syrup and a dusting of powdered sugar or jazz it up with a dollop of whipped cream and blueberry sauce. No matter what you add to it, waking up to a stack of homemade waffles made from scratch is sure to make anyone’s morning!

Why we love this recipe

How to Make this Waffle Recipe

Break out the waffle iron, you’re going to love this simple recipe for light and crispy ricotta waffles!

Step 1: Mix together the flour, baking powder, sugar, and salt, in a medium bowl.

Step 2: In a second bowl, beat just the egg whites until stiff peaks form. This means when they lift out of the bowl, the egg whites hold their structure and don’t drip back down into the bowl.

Step 4: Mix the flour mixture / dry ingredients and wet ingredients together well and then gently fold in the egg whites and blueberries. Cook waffle according to your waffle maker’s instructions until golden brown.

Serve warm with a pat of butter and maple syrup.

TIP: To give you an idea of how much waffle batter to use, an 8” waffle maker uses about 1 cup of batter for large waffles that fill the entire grid.

1. For a lower fat version, substitute ½ cup of unsweetened applesauce for the oil.

3. Substitute oat flour for all-purpose flour as well if desired. You can also substitute for whole wheat flour, but they will come out a little more dense due to the heaviness of the wheat germ.

4. Substitute buttermilk for whole milk. It will add a nice richness and a slight tang to it.

5. Substitute with non-dairy milk if preferred like almond milk or soy milk.


Once cooled, waffles can be stored in an airtight container in the fridge for up to 4 days. They will probably be ok at room temperature for the first few hours which is great if anyone wants to grab one as a snack later on.

How to freeze blueberry ricotta waffles?


Keep wrapped in a freezer-friendly Ziploc and store for up to 2 months. Whether they are frozen or kept in the fridge, they will lose their crispness. A quick pop in the toaster to heat through will get some of that back.

How do you make waffles crispy?


There are a variety of ingredients that go into waffles, and any combination of them can affect the texture. There is one thing that is non-negotiable and that is making sure your waffle iron is HOT before adding any batter to it. This way, it’ll crisp up (almost like a sear) the outside before allowing the inside to catch up to it. The waffle will be ready when the inside is cooked but still fluffy and the outside is nice and crispy.

What does it mean to fold in egg whites?


Gently folding in egg white means you will not bit stirring, whisking, mixing, or whipping. It means you add your egg whites in, use a spatula and literally fold it in over and over again, gently until it is combined. You might give it a gentle stir to combine fully, but it’s never aggressive. This way the air stays incorporated into the batter keeping the waffles light and fluffy. 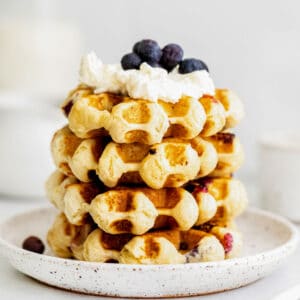 Example of waffle iron – an 8” waffle maker would use about 1 cup of batter for large, whole waffles. Make extra and freeze the waffles for up to 2 months in a freezer friendly zip bag. Then reheat them in the oven when you’re ready to use. Substitute vegetable oil for canola oil. Substitute unsweetened applesauce for the oil.