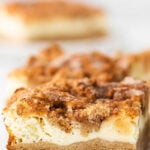 These delicious Snickerdoodle Cheesecake Bars are made with a base of snickerdoodle cookie dough made of butter, cinnamon and brown sugar, a smooth creamy cheesecake layer, and topped with cinnamon sugar and even more sweet crunchy crumbles!

I can’t help but dream of these cookie bars as they are absolutely crave-worthy. They’re so easy to make which is why they’re a go-to when I need something quick and easy for a no-fuss dessert. Especially when making an entire cheesecake isn’t on my to-do list!

Cutting them into bars makes it easy to serve a crowd, and when wrapped individually, they freeze well for later!

What are Snickerdoodle Cheesecake Bars?

Snickerdoodle layer. They’re made with a base layer of buttery snickerdoodle cookie dough made with brown sugar for a deeper flavor and moisture.

Cream cheese layer. Then it’s topped with a sweet creamy cheesecake filling made with the traditional creamy and tangy combination of cream cheese and sour cream.

Top crumble. Finally, it’s finished with even more crumbles of sweet crunchy snickerdoodle and a sprinkling of cinnamon and sugar.

All of this is baked until gooey and amazing!

For the snickerdoodle layer

For the cheesecake layer

For the cinnamon and sugar layer

How to Make this Snickerdoodle Cheesecake Bars Recipe

There are two separate layers in this recipe, each as simple as the next. The hardest part is waiting for them to chill and set but it’s worth the wait!

Step 1: Whisk melted butter and brown sugar in a large bowl. Add egg, and vanilla extract and mix, scraping down the sides as you go. Then, add the flour, baking powder, and cinnamon and blend until there are no large lumps.

Step 2: Transfer ⅔ of the mixture to a 9×9 inch prepared baking dish lined with parchment paper and press down gently into the bottom of the pan an even layer. Keep the remaining mixture aside to use on the top layer.

Step 3: Beat cream cheese, sour cream, and sugar in a medium bowl with a hand mixer on high speed until well blended. Add the egg and vanilla and continue blending for another minute until smooth. (you can also use a stand mixer.)

Again, you always want to scrape down the sides with a rubber spatula to make sure it’s all incorporated.

Step 4: Pour the cheesecake mixture over the snickerdoodle cookie layer and spread it evenly using a spatula. Grab the remaining dough that you set aside from step 2 and crumble the mixture in an even layer across the top of the cheesecake layer.

Finish with a sprinkle of the cinnamon-sugar mixture.

Step 5: Bake assembled bars for 35-40 until golden around the edges. The center should be set and not jiggle when shaken lightly.

Step 6: Remove it from the oven and allow it to cool completely before putting it in the fridge to set for a couple of hours. Slice into 9 bars and enjoy!

1. Add ½ cup finely chopped pecans or walnuts to the bottom crust layer.
2. Make a graham cracker crust by using the same amount of crushed graham crackers instead of flour for the bottom snickerdoodle layer. (I like to use a food processor to pulse graham crackers into fine crumbs)
3. Use equal amounts of almond flour in place of the flour and granular stevia for the sugar for a low-carb alternative.
4. Almond flour or Bob’s Red Mill 1:1 gluten-free all-purpose flour are great ways to make it a gluten-free crust.

How to Store cheesecake bars?


Keep any leftover bars in airtight containers for up to 4 days in the fridge.

Can you freeze cheesecake bars?


You can and you should! It’s a good thing these snickerdoodle cheesecake bars are so easy to make because I like to make two at a time!

I like to flash freeze the bars first separate from each other. Then, transfer them to a freezer-friendly Ziploc bag or airtight container.

Freeze them for up to 3 months and because they won’t freeze in a clump you can grab one whenever the mood strikes! 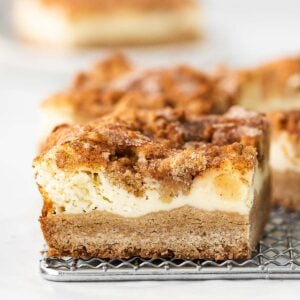 For the Snickerdoodle Layer

For the Cheesecake Layer

For the Cinnamon Sugar Layer

Store in an airtight container in the refrigerator for 3-4 days. Use gluten free flour like Bob’s Red Mill One-to-One flour ,if desired. Use low fat cream cheese and sour cream, if preferred.