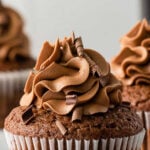 Guinness Chocolate Cupcakes are soft, moist, and infused with reduced Guinness beer which deepens the chocolate flavor in the cupcake and the homemade buttercream frosting!

What better way to sweeten up your St. Patrick’s Day celebration than to add not one but two moist chocolate cupcakes to your menu! Hot Chocolate Cupcakes with Marshmallow Frosting is another cupcake recipe simply made with real cocoa powder and basic pantry staples. Whether you’re using the buttercream frosting or the marshmallow frosting you’ll be hard-pressed to resist either one!

If you’re looking for an extra special dessert to top off your corned beef and cabbage dinner this St. Patrick’s day, these chocolate guinness cupcakes are it! You do not need to love stout or any beer for that matter to appreciate these irresistible cupcakes because the Guinness is there to simply bring out the already present chocolate flavor we all want more of.

These beer cupcakes are rich, moist, and chocolatey but not overly sweet and because they’re lightly flavored with Guinness it takes a traditional chocolate cupcake and elevates it with a deeper chocolatey flavor and just a hint of malt. Then as if that wasn’t enough, it’s topped with a Guinness infused chocolate buttercream perfect for sinking your teeth into. Or licking off first, whatever floats your boat!

For the Guiness Chocolate Buttercream

How to Make Guinness Cupcakes

Boozy cupcakes sound a lot fancier than they are. They’re perfect for occasions like St. Patrick’s day, of course, but they’re easy enough to make any time you want!

Step 1: Simmer the Guinness stout beer in a small saucepan over medium-low heat. Stir often until it has reduced down to about ½ cup. This will take about 15 minutes. Set it aside to cool completely before going any further.

Step 2: Preheat the oven to 350 degrees and line a muffin tin with 12 paper cupcake liners. In a large mixing bowl, whisk together the oil, milk, eggs, and vanilla.

Step 3: Add ¼ cup of the cooled Guinness reduction (you’ll save some for the buttercream later). Follow this with the sugar, then give everything a good stir.

Step 4: Next, add the flour, cocoa, and baking powder to the wet ingredients but only mix until there are no more lumps. Be careful not to over-mix. At this point overdoing it will release too much of the captured air making them dense and heavy.

Step 5: Using a cookie scoop or a ⅓ measuring cup, add cupcake batter to each of the cupcake tins. Fill each one equally to about ¾ of the way full leaving a bit of room for them to rise.

Step 6: Bake for 16-18 minutes. Transfer cupcakes to a wire rack to cool completely before adding the frosting.

Step 1: Add butter and melted chocolate to the bowl of a stand mixer using the paddle attachment. Beat on medium speed until combined which is about 1 minute.

Step 2: Reduce the speed and gradually add the powdered sugar. Scrape down the sides of the bowl as you go, making sure to blend and incorporate everything.

Step 3: Grab your Guinness reduction and add 2 tablespoon of that along with the vanilla extract into the bowl.

Step 4: Increase to high speed and beat for 2 minutes until the frosting becomes fluffy.

Step 5: Transfer the frosting to a piping bag fitted with the tip of your choice and decorate your cupcakes as you please. Garnish with shaved chocolate or chocolate sprinkles to top them off!

Once you get a taste of these delicious treats, you’ll be looking for reasons to make them again and again!


Store cupcakes in the refrigerator for 3-4 days. You can freeze them without the frosting for up to 1 month. Wrap each one in plastic wrap then transfer them to a Ziploc freezer-friendly bag.

How do I know when my cupcakes are done?


A great way to test is by sticking a toothpick into the center of one of them. If, when you lift it back out, it comes out clean it is done. If the batter comes out on the toothpick it means it could use a few extra minutes in the oven.

What else can I use if I don’t have a piping bag or piping tip?


If you’re not looking to be fancy, you can absolutely slather on the frosting with a butter knife. It may not look as elegant but believe me, it’ll be just as delicious! 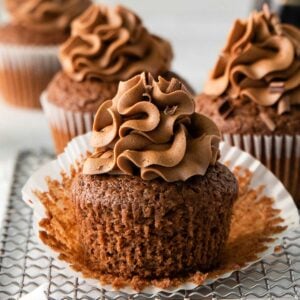 For the Chocolate Cupcakes

For the Guinness Chocolate Buttercream

For the Chocolate Cupcakes

For the Guinness Chocolate Buttercream Frosting

Store cupcakes in the refrigerator for 3-4 days. Guinness Extra Stout is better to use than the Draught version Use unsalted or salted butter for the frosting. Make sure to cool the chocolate chips after melting for about 10 minutes. Leave out the Guinness from the frosting if preferred and substitute with an equal amount of heavy cream or whole milk. The alcohol does cook out of the beer when reducing.