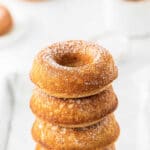 Infused with all the fall flavors of apple cider, cinnamon, and nutmeg, then coated in a cinnamon sugar sprinkle, these baked apple cider donuts are made in a doughnut pan without any deep frying and are so moist and tender!

Anything apple or cinnamon, or a combination of both is one of my favorite reasons to get out from under the warm blankets in the morning! Apple cinnamon baked oatmeal and apple scones are two of my morning staples throughout the fall. The oatmeal is quick and easy on weekday mornings and the scones are a weekend specialty. These apple cider donuts are for any time in between!

These apple cider donuts are an easy, baked treat that beautifully encompasses all the fall flavors like apple cider and cinnamon spice. This delicious donut is moist and tender like an old-fashioned donut but it’s made without yeast and there is no deep-frying so it’s more cake-like and slightly denser. It is fantastic! I treat it as much like a breakfast pastry as I do as an afternoon snack or dessert!

One of the most amazing things about this recipe is that it is super simple to come together in a quick 30 minutes or less, all in one bowl! It’s a healthy version of a fried donut but doesn’t skimp on any of the flavors. In fact, it’s loaded with all things apple cinnamon, and spice! It’s made with actual apple cider which only adds to the moisture and depth of autumn essence, so it just oozes comfort and cozy! Homemade baked donuts might just be my new favorite irresistible baked good…and I’m not exactly sure if that’s a good thing or slightly dangerous. That cinnamon sugar coating gets me every time!

Why this recipe works

How to Make Apple Cider Donuts

This recipe will come together before the rest of the house wakes up, or before your kids get home from school. Either way, they’ll be ready (and then gone) in no time!

Step 1: First, combine dry ingredients in a large bowl. Then, add in the wet ingredients on top of the flour mixture.

Step 2: Whisk to combine, just until there are no more lumps. Be careful not to overmix. Overmixing will cause your donuts to be denser than you’d like them to be because you’re getting rid of too much of the air that will keep them light.

Step 3: After preparing the donut muffin tin with nonstick spray, pour ¼ of the doughnut batter in each groove. It should come up to about ¾ full. This Wilton donut pan is my favorite! Don’t have a donut pan. See my notes below on how to make baked donuts in a muffin pan.

Step 4: Bake for 16-17 minutes until golden brown around the edges. To test it out, use a toothpick and insert it into the thickest part of the donut. If it comes out clean, it’s ready.

Step 5: Mix cinnamon and sugar together in a separate small bowl (preferably a shallow one on easier dipping) and once the donuts are out of the oven, dip them into the cinnamon sugar mixture while they are still warm. Place on a wire rack to cool and then dig in!


These donuts will keep fresh at room temperature for up to 3 days, in an airtight container for maintaining moisture. They’re also freezer friendly, for up to 2 months stored in a ziplock bag. Separate them with parchment paper, so you can take one out as you want it.


The quickest and easiest way to reheat these baked gems would be to thaw in the fridge overnight if they are still frozen and then pop in the microwave for 20 seconds at a time.

Hw to Make Baked Donuts without a Donut Pan?


If you don’t happen to own a donut pan, you can also use a standard muffin tin along with some aluminum foil. Cut 4-5 inch square pieces of foil and place your finger into the center and wrap the foil tightly around your finger. Carefully slide the foil off of your finger. Then place the foil cup into each hole of the muffin tin a press it into place and curl up the sides a little as well.t. 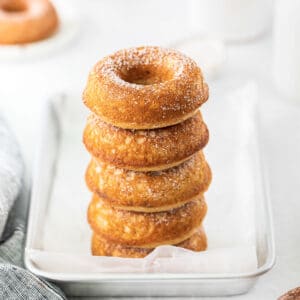 Infused with all the fall flavors of apple cider, cinnamon, and nutmeg, then coated in a cinnamon sugar sprinkle, these baked apple cider donuts are made in a doughnut pan without any deep frying and are so moist and tender!
4.67 from 3 votes
Prevent your screen from going dark
Print Pin Rate
Course: Breakfast, brunch, Dessert
Cuisine: American
Prep Time: 10 minutes
Cook Time: 16 minutes
Total Time: 26 minutes
Servings: 12
Calories: 193kcal
Author: Sherri Hagymas

For the cinnamon/sugar mixture