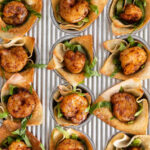 You know what they say, sometimes the best things in life come in small packages like these Shrimp Cucumber Bites. They’re very similar to the shrimp tacos, but seasoned with old bay and served on a slice of cucumber. It’s a low-carb option to provide alongside all of your other delicious finger foods.

These taco bites are one of my favorite bite-size appetizers. They’re a fun little mini version of the real deal, but with just as much flavor packed into every bite. This recipe is simple and versatile enough to make shrimp just the beginning. The seasoning can work for chicken, beef, and pork as well!

Hand-held appetizers or game day snacks are a quick and easy way to feed a crowd, no matter what kind of party. These tasty taco shrimp bites are made with crispy baked wonton shells, which means you can make a lot at once.

Each individual shell holds a plump juicy shrimp that has been seasoned with a smoky blend of spices and seared in a skillet then finished with a drizzle of creamy lime sauce. After that, you can add whatever garnishes are your favorite! Guacamole, shredded cheese, and lettuce are a few of mine.

Why this recipe works

How to Make These Shrimp Bites

This recipe will come together in a few simple steps. Once the wontons are baked, and the shrimp is cooked, it’s just a matter of assembling everything. Easy peasy!

Step 1: Bake wonton wrappers in the oven at 350 degrees, using a mini muffin tin. Remove once golden brown around the edges and allow to cool on a wire wrack.

Step 2: Preheat the skillet and heat the oil. Coat the shrimp with all of the seasonings and add a single layer of shrimp to the hot skillet. Cook shrimp 2-3 minutes per side until no longer pink and firm to the touch. Remove from skillet and set aside.

Step 4: Assemble the bites by grabbing the shells and placing whatever garnishes you choose on the bottom (cheese, lettuce, fresh guacamole, etc). Then drizzle a little of the lime sauce and place shrimp on top.

1: For a gluten free option, use scoop style tortillas chips instead of the wonton cups and skip the baking step.

2: If you like your food spicy, feel free to add a little diced jalapeños or sriracha to each one.


You will be popping these in your mouth like candy, which is great because they don’t actually store very well. So, go ahead, enjoy!

How to make these ahead


Once assembled, the wontons can become quite soggy, so making them ahead means doing things in stages. You can cook the shrimp, you can bake the wrappers, and you can even make the lime sauce. Just don’t assemble it all until you’re ready to serve.

Can I make these gluten free?


Absolutely! You’ll need to swap the wonton wrappers for gluten-free wrappers, tortilla scoops, or perhaps even a piece of lettuce (think lettuce wrap). The other thing you’ll want to watch out for is the seasoning. If you’re not making it homemade, store bought seasoning packages can come with hidden gluten.

What are wonton wrappers made of?


Basically, it’s a wrap made of flour, eggs, and water. They are traditionally used in Asian cuisine, predominantly Chinese. They are quite bland in flavor but used more so as a vessel for filling.

For the Lime Sauce

For the Lime Sauce

To Make the Bites

These bites do not store great since the wonton have a tendency to get soft from the sauces and garnishes. Nutritional information does not include optional garnishes.